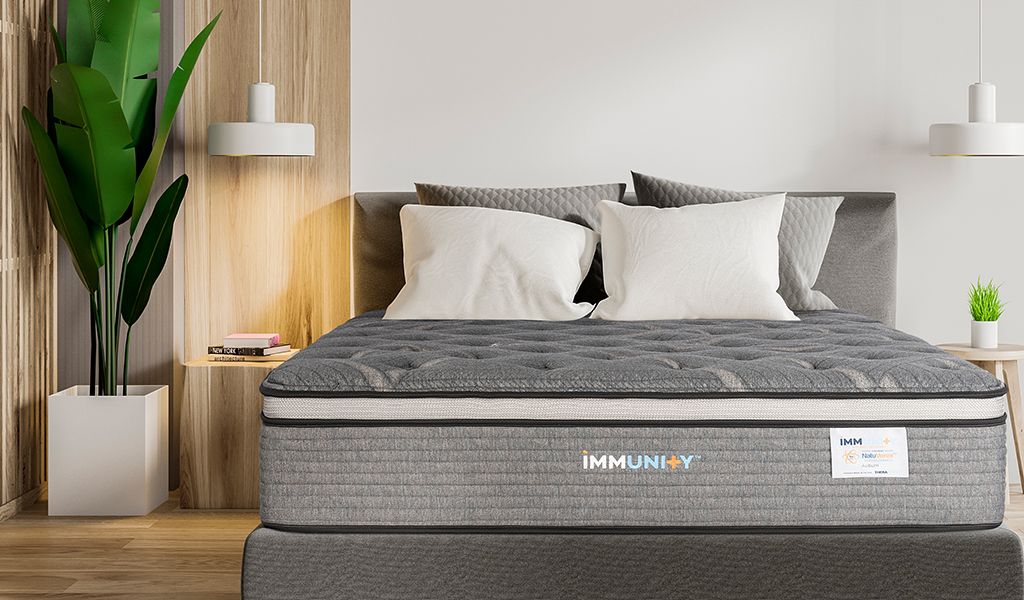 Therapedic International is helping retailers thrive in today’s marketplace by delivering practical resources based on real-life know-how. As president and CEO, Gerry Borreggine continues to draw upon his more than 20 years of experience as a retailer to drive the brand’s initiatives. This unique vantage point helps shape Therapedic’s bedding and marketing programs—ensuring that they are not only relevant and engaging, but translate seamlessly into the retail setting as well. From its timely Immunity collection to its comprehensive marketing and merchandising support and the informative new Inside Track video series, Therapedic is helping retailers elevate their sales strategies to new heights.

If ever a mattress line was tailor-made for the current moment, it would be the new Immunity collection by Therapedic. More than just a well-made mattress collection, this line is further bolstered by a clear branding story that helps retailers connect with consumers at a time when health and wellness remain at the forefront of their minds. The line-up combines exclusive materials and constructions that not only deliver a good night’s sleep—but may aid in boosting the sleeper’s natural immune system as well.

The Immunity collection is comprised of six hybrid beds featuring copper-infused, high-performance foams and Quantum-edge, pocketed coil units. But its most distinguishing feature is the cover; made with patented yarn technology called NatuVerex, it boasts the highest copper content of any mattress cover on the market.

Copper has been tested and proven to be anti-bacterial, improve circulation and boost immune systems. These homeopathic benefits, along with the comfort and support of Immunity mattresses, may provide another line of defense for the health-conscious consumer—delivering a more naturally restorative night’s sleep.

Immunity was designed specifically to ensure that the full benefits of copper are imparted upon the sleeper. According to Fine Cotton Factory, the manufacturer behind the NatuVerex technology, 30% copper content is the “sweet spot” of effectiveness. The company’s research has indicated that, at this level, the ions in the copper yarn can penetrate up to four layers of bed clothing.

“Unlike other products featuring exclusive cooling or healing features that are buried inside the mattress, many layers below the sleep surface, Immunity has its exclusive feature directly on the surface,” explains Borreggine. “And the potency of that feature is so strong that it will permeate through four layers of bed linens, including a mattress pad. This will allow the benefit of the copper to reach the skin of the sleeper, providing the user with the full effect and benefits associated with copper.”

“Unlike other products featuring exclusive cooling or healing features that are buried inside the mattress, many layers below the sleep surface, Immunity has its exclusive feature directly on the surface. This will allow the benefit of the copper to reach the skin of the sleeper, providing the user with the full effect and benefits associated with copper.”

With price points starting at $1,299 and topping out at $2,499, the Immunity collection is already receiving positive reviews from across the Therapedic network. “Immunity got a great response at our show,” notes Illinois-based factory owner, Darren Sodikoff. “We got great placements on the line, and we expect good business from it.”

The collection received a similar response from Jeffri Massie, president of Therapedic Indonesia: “We are definitely going to launch the line in Indonesia at our fall show.” The appeal of Immunity goes beyond just its features and specs too. “We think its positioning is brilliant,” adds Therapedic Indonesia’s Silvia Kho.

While Immunity made its official debut at the winter Las Vegas Market in January 2022, the line was first test-marketed under a different name the year prior. Designed by Therapedic Colorado owners Les Mesner and Rodney Goodrum, the collection was initially dubbed the “MemoryTouch Hybrid.” After it became an immediate hit in the Denver market, Mesner and Goodrum brought the collection to the national Therapedic group, where the company quickly identified the growing value of its health and wellness benefits—and rebranded it as Immunity.

“The Immunity branding gives this great product line more clarity and better positioning,” says Goodrum. “It was a strong product line for our factory, and now it has gotten even stronger with its new branding, point-of-sale materials and positioning.”

Under the tagline, “Keep Well, Sleep Safe,” the collection’s point-of-purchase materials spotlight its unique health-focused positioning. Colorful, eye-catching wall graphics detail the Immunity by Therapedic story, communicating the health benefits of copper and the exclusive features of the NatuVerex cover. All the models also feature copper-centric names such as: Cinnamon, Chestnut, Auburn, Terracotta, Siena, and Sepia.

In many ways, the Immunity collection exemplifies exactly what Therapedic does best. Not only does the company deliver the types of features and benefits today’s mattress consumers are looking for—it also provides retailers with marketing and merchandising support that is both impactful and accessible.

“My heritage is as a retailer,” explains Borreggine. “So I still see everything that we do through the eyes of a retailer—and that view has helped me develop tools, programs and materials that I know I would want as a retailer.”

This mentality can be seen across all of Therapedic’s offerings. In addition to providing eye-catching in-store assets, the company also helps its retail partners expand their online presence with robust digital and video marketing resources. Therapedic’s in-house graphic designer delivers fully customizable marketing materials, including digital and print ads, POS banners and social content for promotions year-round. For added convenience, retailers can also access an entire library of branded social media assets through the company’s PromoBoxx platform—all of which can be posted manually or automatically. By centering the retailer’s experiences, Therapedic is able to develop more meaningful marketing support that works for their partners’ busy schedules.

“My heritage is as a retailer,” explains Borreggine. “So I still see everything that we do through the eyes of a retailer—and that view has helped me develop tools, programs and materials that I know I would want as a retailer.”

When it comes to retailer support, Therapedic always goes above and beyond. These days, the company is also sharing its expertise through Inside Track, a new retailer-focused video series that offers ideas on how to boost rapport with consumers at the point of sale—and how doing so can translate into increased sales.

With Borreggine serving as the author and presenter of each video installment, the series is built upon lessons learned throughout his long history in the industry. In addition to his more than 20 years as a retailer, Borreggine has served as the president and CEO of Therapedic since 2003—creating a rich base of knowledge from which he can share insights. 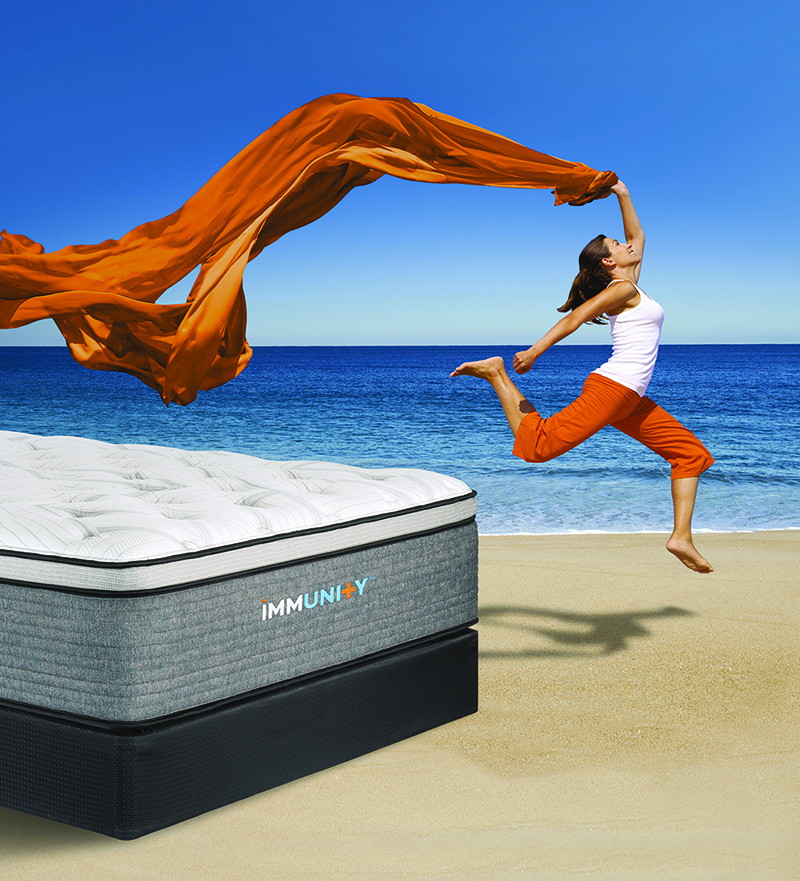 “I think mattress retail sales associates are among the most professional salespeople in the world. And this series is intended to help the RSA’s hone their skills even further, and begin to feel confident enough to discuss things other than product specifications with consumers.”

The content of the series addresses such topics as sales training, merchandising, marketing and advertising—and some less talked about topics like store aesthetics. Each episode is a concise presentation, running between two to four minutes. By relating real-life success stories, Inside Track is designed to help retailers break down any potential barriers that may prevent them from connecting with their customers. This is a particularly timely endeavor, as the pandemic has shifted how consumers shop in a variety of different (and at times conflicting) ways.

“There’s no doubt that there’s a new dynamic between the salesperson and the consumer,” Borreggine explains. “I think the wisest thing for an RSA to do right now is to assume that everything has changed for everybody. They are going to have to make the appropriate adjustments, understanding that it’s going to change from customer to customer or instance to instance. The RSA has to customize their approach to all the different scenarios that they’re going to face.”

While Borreggine has been the series’ primary presenter so far, he is excited to share the spotlight with some retailers as well—creating a valuable opportunity for industry players to come together and share ideas. “There are lessons that we all learn, not only from our own experiences but from the collaborative nature of the business,” he explains. “You sometimes learn from your vendors, sometimes your competition and most times from your customer.”

That is why Inside Track is available to all retailers, not just Therapedic’s existing partners. As Borreggine sees it, if an RSA is able to add just one sale per week from a lesson learned from the series, it will not only elevate the professionalism of salespeople in the industry—but put money in the pockets of those sales professionals as well.

3 Ways To Immediately Build Rapport With The Consumer

Make sure your store looks good from the moment a consumer pulls up to the parking lot. Does it have good curb appeal? Is your sign lit? Is the view to your storefront unobstructed? Is the messaging on your window clear, current and not conflicting with prior sales events?

As soon as a consumer enters your store, they are hit with the smell of it. Keeping your store clean will ensure that it always smells fresh—but you can further elevate the experience using fragrance infusers as well. Try changing the store scent seasonally; maybe a pine scent for the winter, and a floral scent for spring.

When the consumer enters the store, are they confronted with a dead silence? Keeping a light background of soft music playing from an inexpensive smart speaker will eliminate the spookiness of total quiet. Smooth jazz, soft rock or classical music will be a friendly greeting to the consumer. (Just remember to switch it up regularly—not so much for the consumer, but for the store staff!)

Get more retail insights from Inside Track, now available on LinkedIn and YouTube.

This article was featured in the Summer 2022 issue of Sleep Retailer.