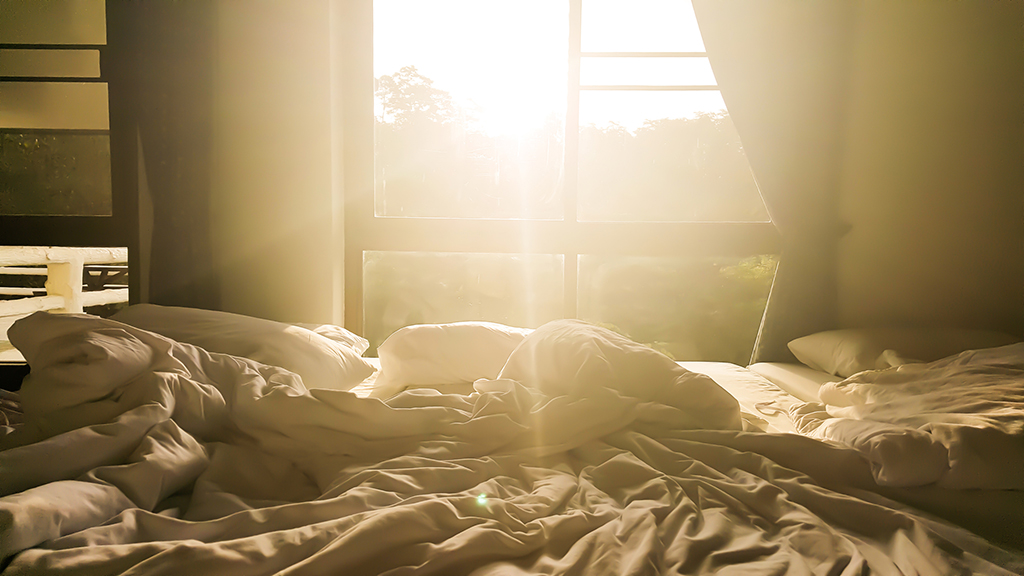 The environmental crisis is hurting our sleep, but can more sleep be part of the solution?

When you think of climate change, sleep may not be the first word that comes to mind—but the relationship between the two may be clearer than you would expect. According to new research, climate change is already making us lose sleep, and not just because of stress. Rather, rising temperatures are making it more difficult to fall and stay asleep, robbing us of much needed shut-eye. On the other side of the coin, some environmental experts have posited that sleep may also be part of the solution—and that by further prioritizing sleep, we can help reshape society to not only be healthier but more environmentally conscious as well.

How Climate Change Is Affecting Our Sleep

According to a recent study published in One Earth, the elevated ambient temperature caused by climate change is already impairing sleep globally—and the disruption will likely continue to get worse if we let things continue as is. For this study, researchers collected sleep data from more than 47,000 adults across 68 countries using sleep-tracking wristbands. Mapping that sleep data onto daily meteorological information, they found that people slept an average of roughly 14 minutes less on nights when the temperature rose above 86 degrees Fahrenheit. Additionally, they found that the overall risk of sleep loss increased significantly whenever temperatures rose above 50 degrees Fahrenheit. Notably, the study also determined that this type of sleep loss was not blunted by continued exposure to hot weather—people who lived in warmer climates year-round were just as affected.

At this rate, if greenhouse gas concentrations are not stabilized, rising temperatures may end up shaving off 50 to 58 hours of sleep per person every year by 2099.

This kind of sleep loss will affect certain people more than others. As people grow old, they are less able to adjust to nighttime temperature increases—putting the elderly at higher risk of losing sleep due to increasing temperatures. The study found that each degree of temperature change affects the elderly twice as much as it does middle-aged or young adults. Additionally, women and people who live in lower income countries are also expected to have their sleep more impacted by these disruptions.

While 2099 may seem far off, the researchers believe that climate change has already begun impacting our sleep—estimating that “by the beginning of the 21st century, temperatures had already caused the loss of 44 hours of sleep because of suboptimal nighttime temperatures, with 11 nights of short sleep per person.”

“The implications are clear: higher temperatures associated with climate change are already reducing the amount of sleep people get and are projected to do so even more,” Kelton Minor, the lead author of the study and a researcher at the University of Copenhagen, told the Guardian. “Since we know that lack of sleep can negatively impact mood, behavior, health and cognitive functioning, this is concerning.”

How Our Sleep Can Affect Climate Change

So good quality sleep is one of the many things at risk due to climate change—but what if it could also be the solution?

That was the idea proposed by Jayson Porter, an an environmental historian at Northwestern University, in a viral tweet back in March: “I’m still stuck on this idea: investing in more sleep for climate justice.” As with quite a bit of social media output, the message seemed to straddle a line of sincerity—genuine suggestion or a glib fantasy? It appears a bit of both. At the very least, though, it offered many people who are concerned about climate change some valuable food for thought. Namely, could that really work?

Yes and no. In truth, the act of sleeping does little to counteract climate change. Rather, spending more time sleeping means spending less time participating in more energy-draining activities. At its core, sleeping is a carbon neutral act. In fact, according to one 2019 study, sleeping is the “least carbon-intensive way for a person to spend their free time; in contrast, going out to eat at a local restaurant emitted nearly 20 times as much carbon dioxide.” Of course, running an air conditioner or a sound machine throughout the night will counteract the carbon neutrality—but the basic idea still stands.

This concept is part of a larger movement that posits that adjusting our societies around less work and more downtime could have real impact on climate change. According to a study conducted by Jonas Nässén, a sustainability researcher at Chalmers University in Sweden, every one percent reduction in working time reduces carbon emissions by 0.8%. In 2012, another study found that an industrial country reducing its work hours by 10% would result in a 14% reduction in its annual carbon footprint—primarily by saving energy used for lighting and cooling offices, as well as minimizing computer usage and commuting.

Of course, the idea that simply sleeping more could help stop climate change sounds nice—but it’s not as easy as it sounds for a lot of people. Lower income individuals often have less control over their work schedules, while many women are often further tasked with more parenting and caretaking duties on top of their regular job responsibilities. That leaves little room for committing to more afternoon naps. At the same time, these are the same demographic categories who are already most likely to be impacted by climate change as well—which, as previously noted, makes sleep more difficult to achieve.

As with everything that has to do with climate change, it’s important to not fall into the trap of personal responsibility. While everyone can do their part, the idea that any one person alone can reverse or exacerbate climate change is a demoralizing tactic often used to distract people from the fact that a small number of corporations are responsible for the majority of environmental damage.

At the end of the day, the relationship between climate change and sleep is one that underscores the inequalities that continue to plague our global society, while also highlighting what is really at stake on a day-to-day level. Caring about sleep hygiene means caring about climate change—and caring about both will help us improve the health and well-being of those around us.

LOGICDATA To Unveil Cosmo Toronto Adjustable Base At Market

The Housing Market Is Slowing Down
Scroll to top