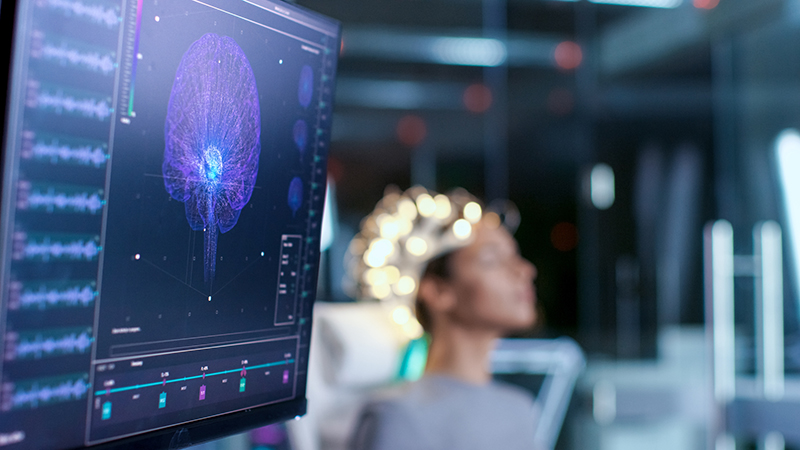 The relationship between sleep and technology has been a tricky one. On the one hand, the prevalence of smartphones has disrupted sleep hygiene in negative ways—but, at the same time, technological advancements have also allowed for more innovative and personalized sleep solutions. But what comes next? As we see it, the future of sleep tech is active, not passive; it delivers real solutions in the moment, automatically and unobtrusively. With these ideas in mind, we wanted to explore two new types of sleep technology that are emblematic of how this segment is evolving: the AugNOD for Augmented Neural Oscillation Driver and Somnox’s new Haptic Breathing smart sleep companion.

Research has shown that some of the most sought-after sleep benefits are directly tied to the ‘deep sleep’ phase. What takes place in the brain during this phase is what leaves you feeling rested and restored. But for a lot of people, it can be hard to achieve and maintain this level of sleep—especially as you get older.

What if there was a way to prompt your brain to access deep phase more readily? That is the goal of the AugNOD for Augmented Neural Oscillation Driver. Currently in prototype form, this device uses an electric current to coax the brain into deep sleep. With an electrode cap that the user wears on their head to monitor brain wave activity, the device senses when the user has been in light sleep for a few minutes—at which point, it then delivers minuscule pulses of electric current through the scalp and skull that mimic the ones the brain itself produces during deep sleep. When presented with these artificial impulses, the brain simply follows along and starts producing the slower waves as well—lulling the user into deep sleep.

“If you change the electrical current going through the head, the neurons naturally synchronize with that,” explained Don Tucker, the professor emeritus at the University of Oregon and maker of the AugNOD for Augmented Neural Oscillation Driver.

While this may sound like the stuff of science-fiction novels, the very idea of delivering small amounts of electricity to the brain is not an entirely novel concept. Known as ‘transcranial electrical stimulation,’ this process was proven to be safe by a comprehensive review in 2017—which found no serious side effects.

The AugNOD device, in particular, is designed to enhance the so-called “glymphatic system” of the brain. A more recent scientific discovery, the glymphatic system refers to the system of blood vessels in the head that pushes fluid through the brain. During deep sleep, this system works to flush away harmful waste proteins in the brain in a process scientists have likened to plumbing or power-washing. The current hypothesis is that, during the deep sleep phase (which occurs right before REM sleep), human brain cells shrink and allow this fluid to move more easily between them—essentially giving each cell a bath. This process of cleaning the cells is theorized to be behind many of the more restorative benefits of sleep; it helps revive concentration, memory and motor skills.

The goal of the AugNOD device is to help users extend their time spent in deep sleep. In a small, peer-reviewed study published last May, Tucker and a team of researchers found that administering tiny pulses of electricity to the brain in five minute increments increased the the length of the deep sleep phase by an average of 13%.

While this type of Augmented Neural Oscillation Driver technology is not yet available to consumers, scientists working in this field believe that reality is not too far off. In fact, Tucker’s company will soon begin a Food and Drug Administration trial for a consumer version of the device.

While the root cause of insomnia can be attributed to a number of different factors, stress and anxiety are common culprits. Both set the sympathetic nervous system (best known for dictating our “fight or flight” response) into overdrive—causing blood pressure and heart rate to spike, which makes it more difficult for a person to fall and stay a sleep. In order to counteract this reaction, the person must activate the parasympathetic nervous system—the “relaxation” response. This lowers blood pressure, slows the heart rate and relaxes muscles, setting the stage for a peaceful trip into dreamland.

It has been scientifically proven that one of the best ways to activate the parasympathetic nervous system is through slow, deep breathing. But, for a lot of people, that’s often easier said than done. That’s where Somnox’s new Haptic Breathing technology comes in. This patented smart sleep companion features a pneumatic system with an air-bladder that inflates and deflates to simulate natural breathing rhythms. As the user holds the device to their body, built-in sensors detect their respiratory rate—it then syncs with the inflation and deflation of the air-bladder to encourage the user to gradually slow down their breathing.

At just 3.75 pounds, the device is light and compact and the cushion is made with plush fabric and memory foam to ensure comfort, allowing it to easily adapt to any sleeping style. And according to Somnox, it has already been a hit with customers—with 85% reporting better sleep almost immediately, and 75% using it nightly two months after they made the purchase.

“Somnox aims to tackle the root-cause of sleep issues: feelings of stress and anxiety,” said Julian Jagtenberg, CEO and co-founder, Somnox.”The breathing guidance of Somnox helps people experience the profound power of breathwork and the benefits of quality sleep and overall calm…We set out to create a safe, comfortable, and science-backed sleep aid that improves sleep through the power of breath and its impact on the autonomic nervous system.”

While these two products address different aspects of the sleep equation, both are designed to go right to the source to deliver more immediate, automatic solutions. Grounded in specific scientific research, these exclusive technologies are also both, interestingly enough, built around the body’s tendency to synchronize with external stimuli. In some ways, you could say they follow the old maxim, “fake it till you make it.” By encouraging the brain and the nervous system to mimic the behaviors associated with good, quality sleep, they effectively trick the body into actually achieving that state. Not only do these technologies point to new opportunities within the world of sleep tech accessories, they also open the door to other kinds of sleep innovations.

What do you think? In 10 years, will we all be wearing electrode caps to bed? Or will the sleep product trends swing back towards a more tech-free austerity?