TRINITY, NC – Sealy® (NYSE: ZZ) has been named a finalist for the 2011 Jay Chiat Awards for Strategic Excellence in recognition of the innovative “Whatever You Do In Bed, Sealy Supports It” campaign for Sealy Posturepedic.®

The prestigious award, sponsored by the American Association of Advertising Agencies, is billed as the first global advertising awards to recognize brilliant strategic thinking. The shortlist is comprised of 10 categories and 68 top entries selected from 45 agencies around the world who submitted work. As a finalist in the Existing Brand category, Sealy shares the spotlight with some other big brands such as Puma, Microsoft, Pepto-Bismol and Audi.

“We are extremely proud of our campaign, and it is a true honor to be nominated for such a prestigious award,” said Jodi Allen, chief marketing officer at Sealy. Here’s just one of the campaigns commercials, though many others can be seen on their YouTube page.

To communicate all of life’s moments Sealy supports, the brand enlisted the help of its advertising agency Leo Burnett, who in collaboration with the Sealy team, created three television spots highlighting life’s moments in bed – from jumping on the bed to spending family time to romance. Previewed during Winter Market 2011 in Las Vegas, the first series of spots debuted in the New York City area during the Superbowl, with all three spots currently airing across the country. In addition, the campaign has experienced groundbreaking success for the mattress category placing a greater focus on digital and social media to reflect today’s consumer with the popular In Bed tagger app.

Winners will be announced during the 4A’s Strategy Festival in New York City, October 13.

About Sealy: Sealy is the bedding industry’s largest global manufacturer with sales of $1.2 billion in fiscal 2010. The Company manufactures and markets a broad range of mattresses and foundations under the Sealy®, Sealy Posturepedic®, Sealy Embody, Stearns & Foster®, and Bassett® brands. Sealy operates 25 plants in North America, and has the largest market share and highest consumer awareness of any bedding brand on the continent. In the United States, Sealy sells its products to approximately 3,000 customers with more than 7,000 retail outlets. Sealy is also a leading supplier to the hospitality industry. 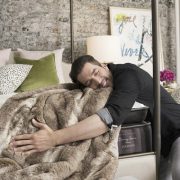 Back Page from the Publisher