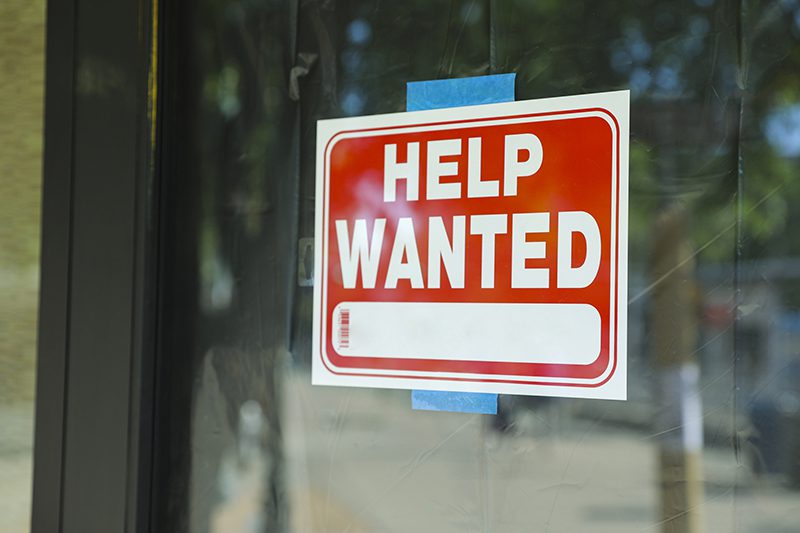 If you’ve been out and about lately, you’ve probably seen the signs—“Help Wanted.” The United States is currently seeing a labor shortage so vast, it’s been deemed the “Great Reassessment.” It’s hit the retail and hospitality sectors the hardest, but nearly all of the job categories that require in-person work have been impacted—especially low-wage or hourly positions. That includes factory and warehouse workers and delivery drivers, which—along with the retail market—has created a ripple effect that can be seen across the bedding industry. The debate about how to rectify this issue has been divisive, with solutions varying from cutting the additional unemployment benefits to offering steep signing bonuses, but experts predict that low job numbers will remain for years to come—and may even significantly alter the work landscape. Understanding the scope of this issue and the predictions for how it will evolve will be key for retailers as they try to navigate the years ahead.

Breaking Down The Labor Shortage Numbers

According to the Washington Post, there are more than 8.4 million unemployed people actively looking for work in the US right now—and a record 10 million job openings needing to be filled. While the math equation looks simple, the reality is more complicated. The labor market added just 235,000 jobs in August, with many unemployed people opting to keep looking rather than taking some of the many low-paying or high-risk jobs available. A lot of folks have simply given up on their search as well. There are now 4.9 million more people who are unemployed and not looking for work than there were pre-pandemic, and 3.6 million who chose to retire during the pandemic (which was roughly 2 million more than expected). Resignations across the board are up 13% over pre-pandemic levels, with leisure and hospitality industries leading the way—followed by the manufacturing and retail sectors.

Of course, it’s not all doom and gloom. More than 75% of jobs that were lost during the pandemic have come back. Over the course of 2021, the US economy has added 4.3 million jobs—and is on track to see an additional 2.2 million by the end of the year, economist Dante DeAntonio of Moody’s Analytics told USA Today. At that pace, he expects the country to make up the remaining 3.5 million jobs lost during the pandemic by the middle of next year, but the ramifications will last even longer.

“The labor shortages will start to abate in September and this fall, but it’s not going to be an immediate fix,” DeAntonio explained. “This could well play out over two, three years.”

Many employers are feeling that crunch now, though, and looking for ways to speed up the recovery.

Will The End Of Extra Unemployment Benefits Help?

Some experts had been quick to place the blame for this shortage on unemployment insurance—why take another job if you can get paid the same, or in some instances more, not working? But new research has put this explanation into question. While the federal unemployment benefits officially ended earlier this week, 22 states cut off that additional funding over the summer in the hopes of enticing people back to work. And, according to a study from JPMorgan Chase, none of those states saw more job growth in July than the ones that kept the benefits in place.

In fact, researchers at Harvard and Columbia estimate that the end of federal benefits this month will likely drive around 500,000 to take on a new job—but, at the same time, result in a roughly $8 billion decrease in spending nationwide. And that trade-off does not bode well for the overall economy.

While additional unemployment benefits may have created a safety net for a lot of people who were out of work, they weren’t the only thing keeping them from taking a new job. The risks of the pandemic are still high, especially for people who are immunocompromised, unvaccinated or have children under the age of 12. On top of that, for a lot of workers, the experience of the pandemic has had a profound effect on how they think about work.

“People’s valuation of their own time has changed,” David Autor, a professor at the M.I.T. department of economics, explained in the New York Times. “Americans are less eager to do low-paid, often dead-end service and hospitality work, deciding instead that more time on family, education and leisure makes for a higher standard of living, even if it means less consumption.”

The Dynamics Are Shifting

He posits that rather than thinking about this as a “job quantity problem,” we should instead view the US as having a “job quality problem.” There are plenty of jobs available, but people are not interested in taking them because they no longer feel their compensation is worth the amount of time, effort and skills required. When you factor in the cost of childcare, elder care and transportation, a minimum wage paycheck is often not enough to cover the expenses of having a job. With more and more people recognizing this, the very dynamics of work are starting to change.

“We’re in a situation where the bargaining power and the labor market has shifted toward job seekers, especially in recent months,” Nick Bunker, economic research director for North America at the Indeed Hiring Lab, told CNBC.

This shift has already had a significant impact on wages. The average pay for so-called “rank-and-file” workers has increased by 2.8% since April—for warehouse workers specifically, pay has increased by 6.1%. Walmart recently announced it would be offering bonuses for warehouse workers who stay through the summer and fall, while Target is rolling out additional perks like debt-free college for both part-time and full-time workers on top of raising their minimum wage to $15.

What To Expect In The Months To Come

These types of financial incentives will be vital for employers moving forward, but they may not be enough. According to the Labor Department, many industries are facing an entirely different problem: they have more job openings than there are people with prior experience in said sector. Good quality training will take on a more important role moving forward, as companies turn to lowering hiring requirements in order to fill empty positions (a common occurrence in a tight job market).

Labor shortages are expected to continue to be an issue well into next year—which will not only mean fewer retail sales associates on store floors, but more delayed deliveries for consumers, retailers and manufacturers. Recognizing that disruptions all along the supply chain will likely be the way of life for the time being, it’ll be important for retailers to make adjustments accordingly—whether in their hiring practices, training services and even marketing messaging.

Checking The Pulse Of The Bedding Industry

The Enduring Value Of Sleep Technology That Works
Scroll to top