Paramount Sleep elected Richard M. Fleck president of the company. This is the first time in the history of the 80-year-old, third generation, family owned business that an individual outside of the family has held the position.

“Our vision has always been to grow the company under the guidance of a bedding industry expert such as Richard. Richard’s professionalism, merchandising skills and his understanding of sales, marketing and operations makes him the perfect choice for the role,” said Jamie Diamonstein.

Fleck joined Paramount Sleep in 2008 as senior vice president of sales and was later promoted to executive vice president and chief marketing officer. A 25-year bedding industry veteran, Fleck has extensive knowledge of the bedding industry, having held senior level sales and marketing positions at some of the industry’s leading brands. He began his career in 1987 as a retail sales associate at Federated Department Stores, Bullock’s division, and was accepted to its Executive Training Program. He later went on to become a bedding buyer for Broadway Department Stores and Barker Brothers Furniture Store.

“Having started out as a retail sales associate, I am extremely humbled to now be president of Paramount Sleep,” reflected Fleck. “I have been very fortunate and blessed to work not only with great companies, but great leaders and mentors in the bedding industry such as Bob Sherman, Barbara Bradford, Burt Kaplan, Richard Yulman, Howard Eisenberg, Tom LeDuc, and Steve, Tino and Pat Antinori.”

Fleck is credited with playing a key role in the successful transition of Paramount Sleep from an independent mattress manufacturer with a single point of distribution to a national network of affiliates that can service retailers anywhere in the country.

“Over the last three years we’ve grown from a regional factory to a global manufacturer of quality bedding products,” added Richard Diamonstein. “Richard has been a tremendous asset to this company and will continue to lay the foundation for strategic and sustainable growth.”

About Paramount Sleep: Paramount Sleep is a third generation, family owned mattress manufacturer based in Norfolk, Va. For more than 80 years, the company has remained one of the industry’s premier suppliers of high quality mattress systems. Available at many top retailers in the country, the company currently produces handcrafted mattresses under eight unique brand names: A.H. Beard®, Back Performance®, Boutique Hotel, Doc in a Box®, GoodNite®, HD Super Duty®, iGravity®, and Nature’s Spa®. 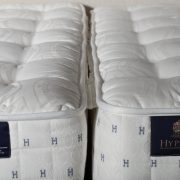