Retailers expressed their hunger for knowledge and commitment to growing their businesses at Nationwide Marketing Group's  recent Virtual PrimeTime, held March 16-18. Centered around the theme of “Better. Faster. Stronger.,” the event provided independent retailers with the opportunity to engage with more education, better buying opportunities and plenty of meaningful networking events and boy, did they engage!

“This isn’t the time to go dark,” Nationwide Chief Member Advocate Tom Hickman told members during the State of Nationwide address. “This is the time to make sure your website is the best and most engaging in your market. This is the time to make sure your brand is competing for awareness and a place in the consumer’s conscience. What you invest today isn’t just about driving traffic this weekend. Today’s investment pays off weeks and months down the road – or even a year from now.”

Attendees took that advice and responded en masse. During the three-day all-digital event, more than 2,500 attendees logged into the Virtual PrimeTime platform, including more than 1,400 representatives from over 1,100 member companies.

Virtual PrimeTime featured more than 100 free-to-attend Nationwide Learning Academy sessions and keynote presentations, which retailers invested thousands of hours in over the course of the show. In total, members attended more than 34,000 sessions, an increase of 112% from the record-setting engagement levels seen during the October Virtual PrimeTime show. On average, attendees viewed 110 minutes of education and attended roughly 12.5 sessions each during the show.

And, the organization anticipates that education numbers will continue to climb in the 30 days following Virtual PrimeTime. Nationwide will again leave the virtual platform open for attendees to catch up on any education sessions they might’ve missed. In fact, already in the first week after the official closing of the show, members have already attended nearly 1,000 additional sessions. 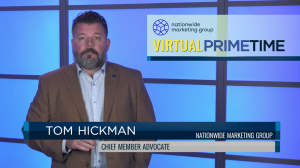 Throughout Virtual PrimeTime, attendees heard from Nationwide’s business leaders on how their investments in education and the group’s digital resources paid off for them over the previous 12 months. Nationwide dealers who partnered with Retailer Web Services and Site on Time saw, on average, 27 percent higher sales than retailers on other platforms. Further, Google WebFronts users who utilize always-on digital advertising experienced year-over-year sell-in performance growth that was three times higher than retailers who didn’t. And Nationwide’s Smart Shopping digital marketing campaigns helped dealers achieve 300% higher conversion rates than traditional shopping campaigns.

The vendor community also saw their engagement with Nationwide members increase dramatically during the second edition of Virtual PrimeTime. Total booth visits at the show rose nearly 20% to over 43,500 visits. And members came ready to spend. As of this reporting, the March Virtual PrimeTime was on track to surpass spending levels during the October event, which saw members accumulate more than $3 million in CashBack rewards.

A major contributor to the increased spend was the return of PrimeTime Palooza during Virtual PrimeTime. The event presented members with a brand-new app-based Palooza experience that was packed with hundreds of show specials and other limited-time, limited-quantity purchasing opportunities.

Virtual PrimeTime concluded with 20 members splitting a grand prize cash pot of $100,000, among many other giveaways. Nationwide also announced that The Bed Store was the largest vote-getter of the video submission charity competition, securing a donation of $10,000 in the store’s name to a cause of their choice.

A Return To In Person In August

Attention now turns to August when PrimeTime aims to return to an in-person format in Nashville.

“Virtual PrimeTime has enabled us to remain connected with our members during the pandemic and offer them the best possible education, networking and buying opportunities while staying socially distanced,” says Nationwide’s Vice President of Member Experience Melissa Stenson. “That said, while PrimeTime will continue to have some virtual aspect moving forward, we can’t wait to meet with our members again in person and are eagerly looking forward to our next PrimeTime show in Nashville in August.”

The 59th edition of Nationwide’s bi-annual show is scheduled for August 15-18, 2021, at the Gaylord Opryland Resort & Convention Center in the Music City.

Nationwide Marketing Group works on behalf of thousands of independent appliance, furniture, bedding, electronics, specialty electronics, custom installation and rent-to-own dealers helping them grow their businesses and thrive on their own terms. With more than 5,000 members operating some 14,000 storefronts, Nationwide Marketing Group is the largest buying, marketing and business support organization of its kind, representing billions in combined annual sales across the membership. For the last 50 years, the organization has remained committed to the independent channel, empowering members with the scale, sophistication and efficiencies they need to compete while delivering the unmatched business intelligence, tools and resources required to win in an ever-changing business environment.