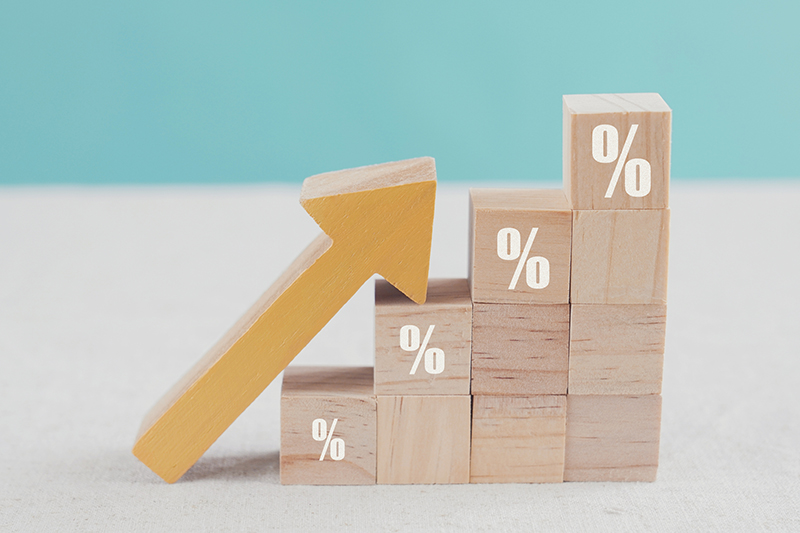 A new Labor Department report released yesterday sent the media cycle abuzz with news of record-level inflation. According to the report, inflation hit a 30-year high last month, increasing 0.9% from September to October for a total annual increase of 6.2% since October 2020. These new numbers contradicted predictions from economists and policymakers who expected inflation to cool off as we neared the end of the year—but should we be sounding the alarm bells just yet? We took a closer look at what the inflation numbers really mean and what impact it may have on the retail industry.

Let’s first take a step back. Put simply, “inflation is a measure of the rate of rising prices of goods and services in an economy.” Price increases can happen as a result of increases in production costs, such as raw materials or wages—or it can be caused by a surge in demand for products and services, which drives consumers to pay more for the products they want.

The Consumer Price Index (CPI) is one of the most popular ways to measure inflation; it measures prices for a variety of goods and services in the economy including food, cars, education and recreation. The other key measure of inflation is the Producer Price Index (PPI), which measures prices that affect domestic producers, including fuel and farm, chemical and metal products. In short, the CPI is more of a B2C measurement, while PPI is a B2B measurement.

Let’s Look At The Numbers

According to the Labor Department report, overall prices went up by 6.2% over the last 12 months. To break that down into somewhat simpler math: a 6.2% increase means that something that cost $10 in October of last year now costs $10.62. And while that may not seem like the most significant change, that increase is still well beyond the 2% average annual gain that the Federal Reserve aims for in a typical year.

The biggest increases came from oil and food, with fuel oil topping out the list with an increase of 59%. But even excluding those categories (which are typically more volatile than others), core prices still climbed more quickly than expected at 4.6%. Bedroom furniture was one of the product categories experiencing price hikes, increasing 12% over the past year. For comparison sake, it came in just below living room, kitchen and dining furniture and just above eggs.

Due to the widespread realities of the pandemic, we are currently experiencing a combination of both cost-push inflation and demand-pull inflation: supply chains are still backed up, while demand for goods has stayed strong.

A perfect storm of factors continues to plague the supply chain: factory shut-downs internationally, containers bottle-necked at ports, shortages of workers in the trucking industry, natural disasters interrupting component production. Each one of these factors contributes to a scarcity of available product, which in turn increases costs. Labor shortages have also driven wages up in a number of sectors more generally, forcing many companies to reevaluate their balance sheets. Eventually, these cost increases are relayed to the consumer in the form of higher price tags. And yet, many consumers are still looking to spend—creating an outsize demand that would have inflated prices even if there were no over-arching supply issues.

It’s for exactly these reasons that Federal Reserve officials have been hesitant to react too strongly to the inflation surge. Because the main drivers of the price increases are all pandemic-specific issues, they stand by the idea that this situation remains largely temporary—even if it is enduring longer than they had hoped.

And in some ways, it may simply seem worse than it really is. Take shelter costs, which make up a third of the CPI computation. According to the Labor Department report, shelter costs increased by 3.5% on a year-over-year basis—meaning that factors like rent prices have increased since last year. This is the highest annual pace of increase since September of 2019, though it’s important to note we’re comparing current costs to that of fall of 2020—a time that was far from normal for the real estate and rental markets. So while that 3.5% annual increase seems steep at face value, it is actually bringing us back to pre-pandemic levels.

While it may not be the crisis that some outlets are decrying it as, the path of inflation is still cause for concern for a lot of people. According to a recent CNN Poll, more than a third of Americans say that the economy is the most pressing problem facing the country right now. And, unfortunately, as with a lot of more abstract economic ideas—the perception of a crisis can often be enough to spook the stock market and worry consumers into changing their behavior.

Why Is Inflation A Problem?

While consumers paying more for certain products is not necessarily notable, the worry is that it will impact other industries and categories. And once inflation spreads throughout an economy, consumers and businesses alike are faced with managing further cost increases across the board. That can swiftly become a major problem if consumers do not have the means to meet them. From the worker perspective, when inflation outpaces wage growth, it erodes many consumers’ purchasing power—putting them in a position of buying based primarily on cost.

From another perspective, inflation can be a problem because it lessens the real value of an investment—making money saved today less valuable tomorrow. This can interfere with retirement plans and slow down other passive income sources, which can make some consumers more tentative with their spending.

Can Inflation Be A Good Thing?

Some say yes, but it really depends on who you’re asking.

Some businesses benefit from inflation, as the surge in demand gives them the power to raise prices and increase profit margins. This could be the case right now for the bedding manufacturers that have been able to minimize the impact of supply chain disruption through strategic sourcing and more efficient production processes. As long as there continues to be consumers willing to pay a little more to get what they want, these companies could come out on top.

At the same time, some workers can also benefit from the economic context that spurs inflation. These periods of higher prices tend to coincide with economic booms when unemployment is low. While the unemployment question is still up in the air, we are at a unique moment when labor is in high demand—which, in turn, gives workers more leverage to demand higher compensation. Just this year alone, there have already been nearly 300 labor strikes in the US and much of the focus has been on raising wages. According to a separate report from the Labor Department, average hourly earnings increased by 0.4% from September to October, hitting a 5.8% increase year-over-year. And higher wages means more money in consumers’ pockets.

Of course, the impact of these changes takes on a different light depending on how you look at it. From one angle, you could say that the positive impact of wage growth has been offset by higher prices on consumer goods. On the other hand, you could also say that the impact of inflation has been buffered by the fact that many consumers are now taking home higher pay.

How Does This Relate To Retail Sales?

While the jury is still out on how the question of inflation versus wage growth will continue to play out in the coming months, the inflation rate does provide us with interesting context through which to evaluate the recent retail sales numbers.

In some ways, the high inflation rate has, well, inflated retail sales numbers—because consumer are paying higher prices on goods. Retail sales jumped 0.7% in September following a nearly 1% increase in August. But experts have noted that the rate of increase for retail sales has been climbing faster than that of inflation. In September, retail sales had increased 14% year-over-year—more than double the nearly 6% increase in the Consumer Price Index.

This is particularly interesting when you look at ecommerce. According to a report from Adobe Digital Insights last month, prices for goods online have risen for 15 consecutive months—in September, online prices were 3.1% higher than the year prior. From a purely inflation focused standpoint, this would seem troublesome. But upon closer examination, this surge may say less about things online getting more expensive—and more about how consumers have simply become more comfortable buying online. According to Adobe, online prices fell 3.9% annually from 2015 to 2019; a period of time when ecommerce had become synonymous with lower prices. During the height of the pandemic, consumers of all demographics shifted to buying all or most of their purchases online. For some, this boosted consumer confidence in ecommerce, perhaps making them more willing to buy even higher-end products online.

“Categories that once had a minor presence in ecommerce are now becoming staples, with unprecedented pricing trends that no longer hold down overall inflation,” said Adobe Digital Insights lead analyst, Vivek Pandya. “We are entering new territory.”

Like so many things over the past two years, this is an unprecedented situation – and neither policymakers or investors are quite sure how it will play out. The main question now becomes whether or not the Federal Reserve will intervene.

Raising interest rates and further pull-back on economic support programs (like stimulative bond buying) could help curb inflation—but it would be doing so by dampening demand and weakening a still shaky job market. Doing so could once again increase the unemployment rate and stagnate wage growth.

Alternatively, the Fed may choose to wait it out a little longer to see if demand will moderate on its own and allow supply chains to catch up. Over the past year, many companies have been working to ramp up their productive capacity to better meet the outsized demand. Given these new efficiencies, production could even snap back and outpace demand in the coming months, causing prices to lower.

But many experts do not have high hopes that supply chain issues will be righted before the end of next year. “Almost all consumer goods are going to be impacted,” Dawn Tiura, the chief executive of Sourcing Industry Group, a member association for supply chain professionals, told the New York Times recently. “It’s not going to let up anytime soon.”

For the time being, we’ll just have to wait and see.

Daylight Saving Time Just Ended, But How Did It Begin?