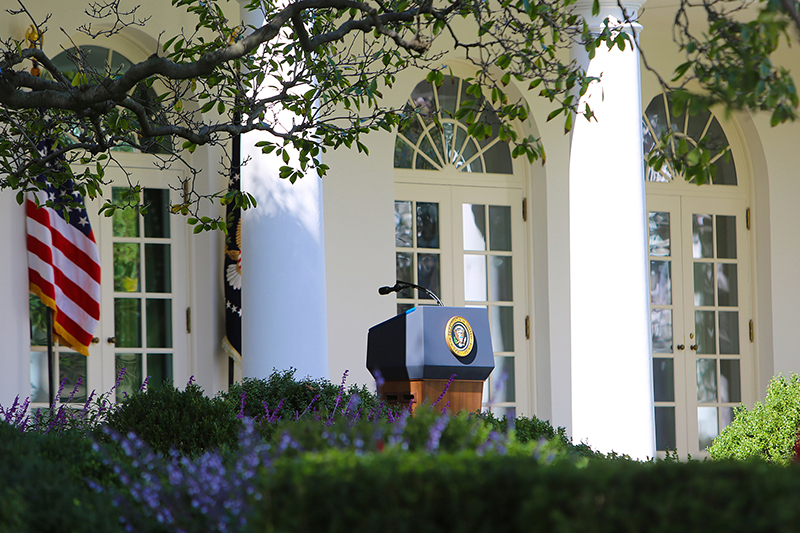 Though the Presidential Election is still officially nine months away, it remains top of mind for many Americans. Between the contentious democratic primary race and the ongoing ramifications of the president’s impeachment trial, the news cycle is steeped in myriad predictions, questions, worries and hopes about how this election (and the next four years) will go. While some days it may feel like the political drama playing out on our TVs is divorced from our day-to-day lives, it may have much more of an impact on our industry than we know.

At the recent winter Las Vegas Market, TD Bank surveyed more than 100 furniture retailers about the year ahead, revealing interesting insights about today’s political climate. According to the survey, 72% of these retailers believe the “2020 election will impact the furniture industry.” While its influence is all but inevitable, we have still yet to determine how the election will affect both the furniture industry and the retail market—though these retailers remain optimistic. Despite the uncertainty, nearly all of the retailers TD Bank surveyed are still optimistic about the market: 90% said that they believed purchasing will increase or remain steady in 2020.” With this in mind, we wanted to dive a little deeper into the relationship between politics, economics and retail sales—looking back to previous election years as well as our current climate to get a clearer picture of what may be on the horizon.

There are two ways in which this upcoming election may impact the bedding retail industry. First, of course, is in how the President has the power to influence policy decisions that impact the retail and manufacturing sectors. While the democratic nominee has yet to be determined, each of the potential candidates is presenting a vision of the presidency that is in stark contrast to the current administration. Over the past four years, President Trump has made a number of decisions that have had either a direct or trickle-down effect on the bedding market—the trade war with China being the most prominent, but also tax cuts, among others. With a democrat in the White House, many of those decisions could be upended. At the same time, a second term may give the current administration the leeway to double-down on such policies. No matter who wins the presidency, each party’s future agenda will no doubt affect the way people make, sell and buy mattresses.

But the election may also begin influencing bedding retail long before it officially takes place. Election years have always been tricky for the retail sector, as the political uncertainty can make consumers more risk-adverse when it comes to spending on non-essential items. While the particular context of today’s political climate is unique, we can still look back to previous presidential election years to get more insight on how things may unfold.

Traditionally, the general wisdom was that presidential election years negatively impact retail sales—especially in the few months leading up to Election Day. According to the retail analytics firm ShopperTrak, retail foot traffic has a tendency to drop during election years. In 2012, the firm analyzed both enclosed malls and national retail stores and found that overall consumer traffic fell by 12.4%.

The sentiments expressed in TD Bank’s retailer survey were actually similar to what we heard from industry leaders in the months leading up to the 2016 election. In August of that year, the market research firm Coresight Research teamed up with predictive analytics provider First Insight to survey more than 100 retail leaders to gauge their feelings and predictions for the year ahead. That survey found that the majority believed that the election would have a “strong impact on consumer spending during the second half of 2016.” When it came to specifics on how it would impact consumers, though, the responses were split: 33% predicted it would have a positive effect on spending, 31% said it would be negative, and 35% said neutral.

So how did these predictions actually play out in 2016? Let’s look at the numbers.

The year started out pretty rocky, with retail sales falling by 0.4% in January 2016 and 0.1% in February. In particular, sales dropped at home furnishings retailers, department stores and Internet sellers. Analysts were quick to note though that those numbers did not take inflation into account; a trend towards lower price points made the overall sales figures seem slow, while actual consumer spending remained strong. Even so, the drop in sales was notable because it was in contrast to steady job creation, which often leads to increased spending.

By the end of 2016, these numbers seemed to turn around. October saw a 0.6% increase, followed by an additional 0.1% increase in November. In comparison to the year before, November 2016 sales jumped by 3.8%. The 2016 holiday shopping season also saw sales increase, by 4.1% when compared to the same period in 2015. From October to December of that year, consumer spending increased “sequentially” each month—which led experts at the Motley Fool to note that this sort of steady increase in non-essential purchasing is important because it indicates that “the average person has more extra money to spend each month.” As a whole, total retail and food services sales increased 3.3% to hit $5.5 trillion in 2016.

So despite the divisiveness of the 2016 election, all of the uncertainty didn’t end up tanking the retail market—nor did it have all that much of an impact overall as these sort of ups and downs are par for the course for sales numbers.

This is good news for people hoping for a steady 2020. In fact, when looking at the sales numbers alone, there are plenty of similarities between today and 2016. Retail sales were positive albeit somewhat sluggish at the outset of this year. In January, retail sales increased by 0.3%. The majority of that increase came from “home centers” like Home Depot and Lowe’s, while other retail segments related to the home were more modest. The one exception was from companies selling home furnishings, which reported a 0.6% increase in sales.

With that in mind, there is also some evidence that the 2020 election may have even less of an impact on retail sales. When we say the 2016 election was a somewhat unique case, it is not only because the two candidates offered two very different agendas—but also because they both represented a truly uncertain future. In general, the markets tend to respond more drastically to presidential elections when it is a two-term president leaving office. That response is less volatile when there is an incumbent president running, because it is assumed that we at least have a general idea how that candidate will continue to run the country.

Of course, it’s important to remember that none of this is happening in a vacuum. While we can look back into recent history for insights, we cannot guarantee that it will play out exactly the same each time. In fact, there is a seemingly endless amount of disparate factors that shape these sort of economic and socio-political trends and decisions:

In 2016, Shelley Kohan, analyst at in-store analytics provider RetailNext, spoke with Retail Dive about the impact of presidential elections on retail sales, saying: “I think there are other more pertinent factors that impact shopping, especially going into the holidays. For example, economic factors like oil prices, unemployment, interest rates, inflation — I think holiday season in general is geared up to be very positive based on current economic indicators and I don’t think the election is going to derail those positive projections.”

This idea was reiterated more recently by David Berson, Nationwide chief economist. He told MarketWatch that, “given the strong pace of job gains and signs of rising wages, this pace of retail sales is certainly sustainable and it may increase a bit in coming months.”

With higher incomes and a lower joblessness rate, some analysts believe Americans are more confident with the US economy—and that confidence is expected to help bolster consumer spending and steadily expand the economy throughout 2020.

When it comes to the bedding sector, we do have to take into account the ongoing impact of the Chinese trade war as well. According to the TD Bank retailer survey, 40% of respondents said “the trade war’s impact on their business supply chain and bottom line is their greatest concern in the next 12 months.”

President Trump signed a “preliminary trade deal” just last week, which, if it is carried out, aims to deescalate the tensions by promising to increase American exports and prevent new tariffs. This along with the newly overhauled North American Free Trade Agreement (which has received Senate approval and is currently awaiting the president’s signature) are helping to quell the fears of many American business leaders.

But, according to some experts, we have yet to see the full effect of the trade war—and many expect that we will continue to feel its impact for quite some time. To fully understand its implications, we have to look beyond retail sales numbers. According to a recent article in the New York Times, ongoing uncertainty around trade has left many associated industries hurting. Reports showed that U.S. factories lost 12,000 jobs in December, while transportation and warehouse employers cut more than 10,000. That same month also saw freight volumes fall by 7.9% when compared to December 2018—marking “the greatest year-over-year decline since the recession a decade ago,” according to data from Cass Information Systems). With each of these sectors playing an essential role in the larger eco-system of the manufacturing and retail sales industries, we have yet to see what sort of impact these changes will have down the line.

We cannot say for certain how the bedding retail market will fare amidst this presidential election year. If history is to be believed, it isn’t likely that the election itself will have much of a direct impact on retail sales numbers. But the larger political questions arising from this race are sure to have long-term influence on how businesses are run and products are bought and sold. In the end, the first thing that manufacturers and retailers can do when faced with such uncertainty is to, at the very least, recognize the real possibility that any outcome may come to fruition.

As Mike Rittler, General Manager of Retail Card Services, Personal Lending and Business Development at TD Bank, sees it: “Despite the uncertainty that comes with an election year and an ongoing trade war, the direction the economy ultimately heads in 2020 will be dictated by the consumer and what they decide to do with their wallets.”

This story was originally featured in eNews. Click here to get Sleep Retailer eNews delivered straight to your inbox.

The Adjustable Power Base Opportunity