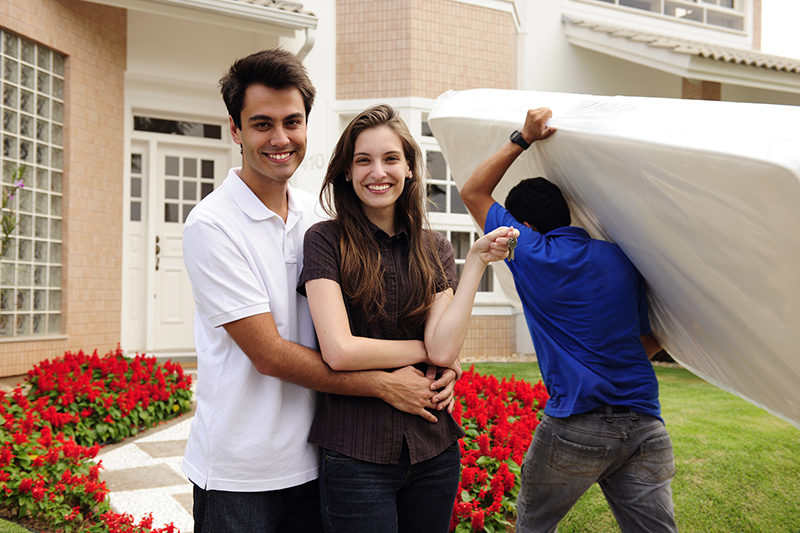 Understanding the connection between house and mattress sales, and exploring what comes next.

Reports of a red-hot housing boom began early in the pandemic, as expanded work from home capabilities and the desire for more space had people flocking to buy homes in more rural and suburban areas. Even as this led to higher prices and more competition, demand never really let up. This has been good news for the bedding and mattress sector, which typically sees an uptick in sales when the housing market is strong. Simply put, when someone buys a new house, it’s more likely that they will also buy a new mattress—either to replace an old one or to fill new additional bedrooms. Because of this clear correlation, it can be extremely helpful for any mattress maker or seller to keep an eye on how the housing market is evolving.  Predictions are not set in stone, but having a sense for when the market may cool off can help bedding retailers better prepare for the future. But it’s about more than just strong versus sluggish; by digging deeper into who is benefiting from this strong market (and who is being left behind), companies can utilize these insights to shape more effective marketing and selling strategies.

What Happened During The Pandemic

People rushed to buy homes during the pandemic. It wasn’t just the desire for more space or the uptick in saves—homebuyers were also benefitting from record-low mortgage rates thanks to the mortgage forbearance program. There was also another non-pandemic-related factor at play: the biggest subset of the millennial generation also turned 30 during this time, which has traditionally been a significant age market for first-time home buying.

This sudden influx of buyers drove down housing inventory—which, in turn, spiked prices. But the demand never abated. In fact, the homeownership rate in 2020 rose by 1.3%, bringing it to hitting 65.5%. That means that roughly 2.6 million more households became homeowners in 2020 compared to 2019.

This uptick in housing sales was reflected in the mattress industry as well. According to the International Sleep Products Association’s statistics committee, total mattress shipment units increased by 7% and dollar value increased by 6.9% in 2020—thanks to the continued “increase in disposable income as economic activities rebound from the pandemic, and the strong growth in the housing market in both housing starts and housing resales.”

But as is always the case, the increased demand from home buyers quickly drove up prices. Home prices in the US increased by 18.8% over the course of 2021, according to S&P CoreLogic Case-Shiller home price index. These prices have risen approximately 30% since 2019.

Given this steep incline in pricing, real estate experts predicted that the market boom would soon fizzle out—especially after the mortgage forbearance program came to a close. But they were, largely, wrong.

Home buyers are not just feeling restless. There are a number of different factors that are contributing to the outsized demand—and a lot of it has to do with limited supply.

Housing inventory is a key metric for determining how hot the market is—the fewer houses on the market, the more competitive each sale becomes. According to Zillow, things cooled off slightly in 2021, with inventory growing from 960,000 listings in April to 1.1 million in September. But by February 2022, inventory levels once again sank to just 729,000 listings—a 48% decrease from the year prior. It is also the fifth straight month of declining inventory, bringing inventory levels to the lowest they’ve been in nearly four decades. And low inventory means more competition for each house. In January of this year, 70% of home sales ended in a bidding war—the highest rate on record.

The five largest birth years of the millennial generation were from 1989 to 1993—which means that an unprecedented number of people have turned 30 within the last three years. That window will continue until 2023. Traditionally, 30 years old has been seen as the most common “first-time home buying” age.

Lingering Effect Of The 2008 Financial Crisis

After the 2008 financial crisis, many homebuilders cut back on building new houses. In 2005, there were 25 million homes built in the US—in 2012, there were just 9.4 million. Though the rate of building did grow over the past decade, the dwindling housing inventory levels are evidence that they did not pick up the pace enough.

And, of course, like seemingly everything over the past year—the global supply chain is also part of the problem. Delays and material shortages set homebuilders back significantly, making it more difficult for them to fulfill contracts on time to meet the demand. Many are now just catching up on the backlog of delayed construction projects.

A Busy Spring — Before Mortgage Rate Hikes Set In

With inflation continuing to hit consumers pocketbooks hard, the Federal Reserve has been hinting at the possibility of rate hikes in order to curb the too high price tags. Higher mortgage rates means higher monthly payments on new loans—and that, on top of the already sky-high listing prices, may prompt potential home buyers to reconsider. Less demand will allow homebuilders to catch up and house prices to level out.

But before that happens, the looming threat of rate hikes may actually increase the demand in the short term, as prospective buyers look to get ahead of them and buy now. In fact, mortgage rates actually fell in late February, which will likely lead to a surge in offers—especially since spring is also typically known as “home buying season.”

If this plays out as expected, mattress sellers may also see a significant uptick in sales this spring. Are you prepared to meet the demand?

Home Prices Will Continue To Grow

But according to experts, the housing market isn’t expected to come to a screeching halt any time soon. Fannie Mae is forecasting that the median existing home price will increase by 11.2% in 2022. The firm had initially predicted the increase would be closer to 8% this year, but decided to up its estimations given the shifting factors of the economy. This new forecast will push the median price for existing home sales from $355,000 to $384,000. Other groups are still staying more conservative with their forecasts. The National Association of Realtors, for one, is predicting a 5.7% increase in house prices through the end of 2022.

But even at the most conservative estimation, home prices are still significantly outpacing wage growth in the US. According to the Conference Board’s Salary Increase Budget Survey, the average salary increase budget for corporate America this year is just 3.9%. Which leads economists to believe that the housing frenzy will eventually have to slow down—home price growth can’t outpace income growth forever, right? People need to be able to afford houses to buy them.

So Who Is Buying Houses Right Now?

As we noted, the homeownership rate in the US rose to 65.5% in 2020. But not everyone has gotten in on the home buying craze.

According to Jessica Lautz, vice president of demographics and behavioral insights at the National Association of Realtors, the largest generation of homebuyers she has seen are millennials. In particular, she specified that the most likely homebuyer is a “middle-aged millennial with a six-figure household income who may be married…but the person could also be a single woman or part of an unmarried couple.”

But there’s also another factor to consider: there is a growing number of homes being bought by hedge funds and investors. According to Cris deRitis, deputy chief economist at Moody’s Analytics, roughly 25% of homebuyers today are investors. While this is still a small percentage of the total number of homebuyers in the market, it has increased from the 10 to 15% over the past few years. Today, institutional investors own 2% of all single-family rental homes in America, according Amherst Pierpont Securities. But these investors are particularly focused on “buying up the stock of relatively inexpensive single-family homes built since the 1970s in growing metro areas,” explains Elena Botella in Slate—the types of homes that may be more attainable for working and middle-class households. In fact, high housing prices are driving more and more Americans back into the rental market. Between the first and third quarter of 2021, an additional 870,000 households entered the rental market—driving occupancy rates down to 5.8%, the lowest they’ve been since the 80s. This has had a significant impact on rental prices as well. According to a new report from CoreLogic, single-family rents were increased by 12.6% from January 2021 to January 2022.

There’s no doubt that a strong housing market is good for the mattress industry—but understanding who is really benefitting from this boom can be incredibly valuable for retailers. Marketing your products to high-income home buyers is going to be very different than marketing them to lower- or middle-income consumers who have been priced out of the buying market and are instead facing an increasingly challenging rental market.

It’s also important to keep an eye on how the housing market continues to evolve. Demand for housing will eventually go down, one way or another. And while the mattress industry can and should ride this wave as far as it can go—it’s just as necessary to plan for the eventual fall as well. Looking ahead to 2023, Fannie Mae forecasts that increases in home prices will be just 4.2%. Similarly, ISPA’s statistics committee is forecasting a 2% growth in mattress units and 4.5% increase in mattress value “supported by the increase in disposable income and the continued albeit muted growth in the housing market.”

Americans Are Not Getting High Quality Sleep