Vi-Spring has strengthened its presence in North America by teaming with E.S. Kluft & Co., which manufactures luxury mattresses under the Kluft and Aireloom brands. Earl Kluft, the founder and chief executive officer of E.S. Kluft & Co., will be the CEO of the combined North American company and has signed a long-term contract to remain in that role. As part of the new arrangement, Vi-Spring will purchase 51-percent of E.S. Kluft & Co. The company will continue selling and marketing the brands separately with their own unique product portfolios.

The deal will strengthen Kluft’s leadership in the U.S. luxury segment and enhance its international presence by leveraging the existing retailer network of Vi-Spring, which has operations in Europe, Asia and North America, and its parent company, the Flex Group of Madrid, Spain, which has a strong presence in Southern Europe and Latin America.

All employees of both companies in North America will be retained, including Kluft’s U.S. President of Sales David Binke and Senior Vice President of Operations Ron Bruneau, and Vi-Spring North America Director Terence Bachor, who will remain in his role managing Vi-Spring in the USA and Canada. All will report directly to Earl Kluft.

“For many years I have admired English luxury beds, particularly Vi-Spring, that I believe really has no peers when it comes to their excellent quality and craftsmanship. I see this as an opportunity for both of us to grow our brands worldwide. Combined, we now will be able to claim both Bloomingdale’s and Harrod’s as our company’s flagship stores,” said Kluft.

“The transaction will enable us to have a much wider range of exciting luxury products and additional options in our combined portfolio for retailers and consumers in the North American market. This will absolutely facilitate far greater international expansion,” he added.

“We have known Earl for many years and respect the quality and high standards that he has brought to our industry. Together, we shall make an exciting team. For Vi-Spring and the Flex Group, this is a strategic move as we will accelerate our growth in the American market with the help of a very reputable U.S. company and compete internationally with a great portfolio of luxury brands,” said Vi-Spring Managing Director Mike Meehan. “Integrating the North American operations will generate significant operational savings in back office and logistics, yet offer retailers and consumers the widest and most differentiated range of prestigious luxury beds.”

The new organization will boost Vi-Spring’s presence in North America where it opened its first retailer only three years ago.

About Vi-Spring: The British-based company, founded in 1901 in London, has been for over 100 years one of the world’s most prestigious mattress producer and has operations in the Europe, Asia and North America. Vi-Spring has always been associated with traditional craftsmanship, finest natural materials, most exclusive retailers and many product awards.

About E.S. Kluft & Co.: Earl Kluft is a third-generation mattress manufacturer who founded E.S. Kluft & Co. and bought Aireloom in 2004. The broad range of luxury mattresses are produced in California and Pennsylvania facilities and sold under the Kluft and Aireloom brands in 350 select retailers in the United States and internationally. Kluft’s Aireloom designs offer artisanal quality and legacy features such as hand-tied coils and hand side-stitching. The company’s lines feature the advanced patented designs as well as high quality materials. 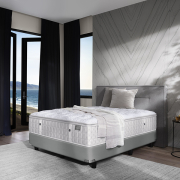