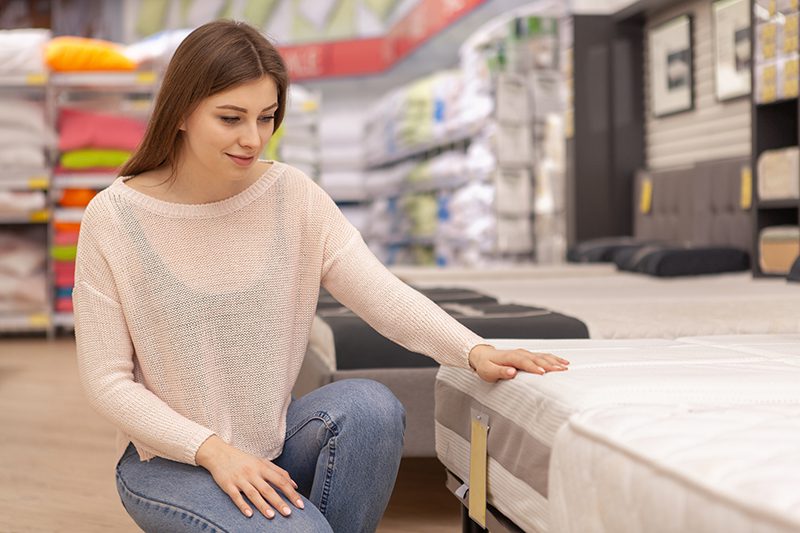 Initially expected to be the bedding industry’s big return to normal, the summer Las Vegas Market was once again muted by the ongoing pandemic. In the weeks leading up to the show, the risks of the Delta variant prompted many people to cancel their plans—the Sleep Retailer team included. Thankfully, we’ve all become nothing short of old pros at virtual meetings over the past year and a half and were able to catch up with a number of bedding companies both during and after market. And while the product introductions and program updates may have varied, we heard similar insights from many different brands. No matter where you are positioned in the industry, the issues remain the same: supply chain and logistics continue to cause the biggest headaches. But there is hope for the future. In reflecting on the summer market, we’re considering the future of market, uncertainties around consumer demand, solutions manufacturers have implemented to address the ongoing logistics nightmare—as well as what’s next for the industry.

What Will Be The Role Of Market Moving Forward?

The most popular phrase used to describe the summer market? “Quality over quantity.” We heard it from pretty much every company we chatted with. Traffic was slow, but conversations were strong. Many of the bigger retailers still sent some of their buying team, but many of the smaller, independent players opted out. All in all, traffic-wise, the summer show was not far off from April’s rescheduled winter market.

After three pandemic-era Las Vegas Markets, it’s hard not to wonder what sort of role this event will play moving forward. Most companies have figured out how to effectively hybridize their showroom experience—blending in-person meetings with virtual showcases and smaller more localized events. With all of those options on hand, is one big industry-wide event even necessary anymore? A few manufacturers expressed their doubts, but, for the most part, the interest still seems to be there—as long as things are safe and retailers show up.

Given the lackluster summer turn-out, expectations are even higher for the upcoming winter Las Vegas Market. Everyone has alluded to big product introductions in the works, and a number of manufacturers have even invested in new showrooms. No matter what happens, it sounds like there will be plenty of new product to explore come January.

How Consumer Demand Is Evolving

There’s no question that demand for mattresses and bedding has been unprecedented over the course of the pandemic. Stuck at home and inundated with messages about health and wellness, there was a notable surge in consumers investing in upgraded sleep systems and bedroom sets. But almost as soon as the demand began to peak, anxieties started to creep in. How long can this last?

It’s still hard to say. In a lot of ways, there has been a categorical shift in the way people think about their home and health—and the role that sleep plays in their lives. But mattresses and bedding are not typically replaced every year or even every couple of years. And now that consumers have opportunities to spend their money on travel and entertainment again, maybe that’s where all of the pent-up demand will migrate.

While it is impossible to know for sure how consumer demand will play out, there are a number of key indicators that we can look towards. Housing starts have been through the roof, which often correlates to growth in mattress sales—but they dropped 7% in July, signaling that things may be cooling down. Additionally, U.S consumer confidence hit a six-month low in August, as fears around the delta variant have grown. But, on a more positive note, American households still accumulated at least $2.5 trillion in additional savings during the pandemic, which has established a strong foundation for future spending once worries surrounding the virus alleviate.

Without a crystal ball, we can’t know for sure until it happens—but no matter what, it’s clear that the bedding industry is at a valuable juncture right now. Nothing is set in stone, which means both manufacturers and retailers have an opportunity to reevaluate their strategy and look for new places of potential growth.

Without a doubt, sourcing and logistics are two of the biggest challenges facing the bedding industry right now. While consumer demand may be holding steady for the time being, component shortages, container prices and fulfillment delays have made things difficult to navigate for both manufacturers and retailers.

It’s a bit like whack-a-mole, one manufacturer told us. When one component is back in stock, another one suddenly has an issue. Early on in the pandemic, it was nonwovens that were in short-supply as they were rerouted to make PPE—limiting the pocketed coil supply. Then it was wood for box springs. Any major storm in the Gulf Coast affects chemical inputs, which limits the availability of foam. And it’s not just the raw materials either. Container costs in general have skyrocketed in recent months, while back-ups at ports have left both products and materials delayed.

In many ways, one of the most popular marketing messages right now is the promise of having product in stock and ready to ship. Over the past year, manufacturers have had to find new ways to reckon with the difficulties and delays—whether by diversifying their sources, migrating their supply chain, or bringing more production in-house. Companies that rely on international imports have had a rougher go of it, but domestic manufacturers have also had to navigate plenty of logistical issues, such as understaffed factories and trucking companies.

These challenges are not necessarily affecting the construction of the products manufacturers are putting out, but they are impacting their timelines. Many companies have been reevaluating their introduction schedule, holding off on debuting new products until they can be sure they will have the bandwidth to supply them.

For retailers, the question becomes: is it better to find new manufacturing partners that have inventory ready to go—or focus on managing consumer expectations instead? The right answer seems to be a little of both.

Thankfully, things are starting to look up. Many companies noted that they are back on track and in better positions than they have been in the past year and a half. But when it comes to supply chain, it is impossible to predict how the tides will turn. Extreme weather due to climate change continues to destabilize both material production and delivery processes. And with that in mind, most manufacturers are starting to plan ahead. More and more are looking to safeguard themselves against future supply issues by creating sourcing redundancies, along with buying and storing excess product.

So while a lot of talk has been about how the pandemic has changed buying habits and distribution channels, the greater impact of the past year and a half may be on production and logistics. The very infrastructure of the bedding industry is evolving—and there is no doubt that the retail landscape will change along with it in the months and years to come.

Want to learn more about the new products on display at market? Check out the summer issue of Sleep Retailer!