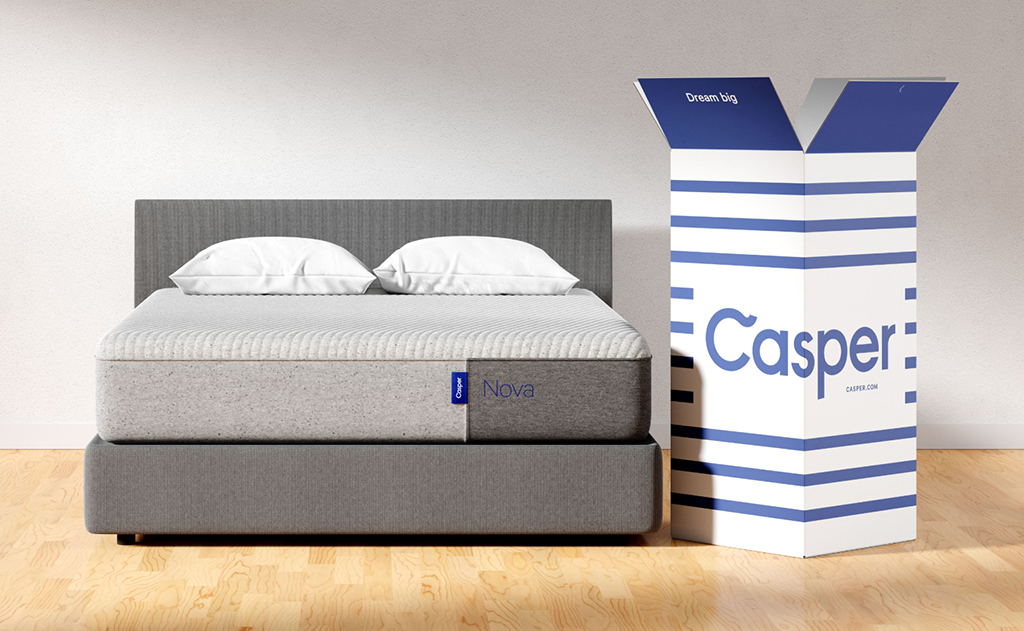 What the brand’s bumpy road says about the mattress industry – and where the next big disrupter will be.

Casper Sleep recently announced a new shift in strategy, returning to the private company structure and focusing on becoming profitable after years of financial challenges. Speaking at a retail conference in Boston last week, CEO Emilie Arel outlined a new “culture of frugality” that will drive the brand moving forward, saying, “We’re not in the business of not making money anymore.” More than just a newsworthy update, the company’s strategic moves reflect the changing tides of the mattress industry—and underscore the waning impact of the online-only sales approach. As Casper reverses course and embraces many of the same traditional methodology that it once eschewed, the question for the bedding retail market becomes: what comes next?

Over the years, the name Casper has become synonymous with the boom of digitally native, direct-to-consumer bed-in-a-box brands. But despite its lasting cultural impact, the company has long struggled to reach financial viability.

Back in 2018, Casper first reported a net loss of over $92 million—prompting the brand to make an initial shift in strategy. With dwindling financial returns on its mattress business, the company looked to new product categories in hopes of capturing a larger portion of the so-called “sleep economy.” That included branching out into pillows, dog beds, nightlights and even CBD gummies. The product expansion also coincided with a significant investment into brick-and-mortar “showcase” stores, along with select partnerships with leading big-box retailers.

But this approach proved unsuccessful, according to Arel. “Part of the issue at Casper over the last few years had been the shiny penny syndrome. ‘Oh, that’s very interesting. Let’s go do that,’” she explained. “That is very confusing for people.”

Casper’s financial challenges were further exacerbated by the pandemic. The company went public in early 2020 and was faced with finding new ways to achieve profitability. So just as other mattress brands were investing heavily in their marketing spends to meet the growing demand from stuck-at-home consumers, Casper was pulling back. “We miscalculated,” Arel explained. “We made the wrong call as a leadership team. And so our competitors outgrew us.” Despite a revenue boost of 13%, Casper saw a net loss of nearly $90 million in 2020—with its marketing expenses totaling more than 30% of its revenue for the year.

In November 2021, Casper announced its plan to be taken private by Durational Capital Management, a private equity firm. After a lackluster stint in the public sphere, the goal of this move was to provide the company with “much needed capital to execute on future initiatives to sustain and grow its business,” said former CEO Philip Krim, at the time.

Now, with inflation and economic uncertainty dampening demand across the entire mattress retail industry, Casper is once again shifting its strategy.

Casper’s New Strategy: ‘We are a mattress retailer’

As Casper looks to the future, profitability is its main focus. That means trimming the fat and rethinking its previous approach. “The strategy was to be the Nike of sleep. Nobody knows what that means,” Arel explained. “That sounds very exciting, but hard to execute on. We weren’t making any money…VC money is not falling from the ceiling anymore, we need to be very specific on what we’re working on. And so moving from being a lifestyle brand — being sort of the Nike of sleep, selling to everybody — to: ‘We are a mattress retailer.’”

As part of that shift away from being a lifestyle brand, the new Casper strategy includes:

It’s hard not to notice the irony: when the financials got tight, Casper turned back to the tried and true mattress retail model—the exact approach the company was attempting to upend when it came on the scene.

But that doesn’t mean the company and its original concept didn’t help bring about change in the industry. There is no doubt that Casper was a true disrupter in that it pushed other bedding brands to evolve. The company was integral in identifying the pain points and challenges within the traditional mattress retail model—and ultimately created a propulsive, albeit imperfect solution.

But at the end of the day, the moral of the story is simple: when it comes to not only reinventing the mattress marketplace but simply succeeding in it, Casper’s strategy is no longer working.

What Comes Next? New Opportunities For Future Disruption

Of course, the take-away from this trajectory is not that the mattress industry should stay stuck in the past—but rather, that it is once again time to uncover the opportunities, ideas and solutions that will make an impact. What will be the next big disrupter? Only time will tell, but we have a few ideas of how to get there.

While the online DTC mattress model solved a lot of problems for consumers, it also created a number of new issues along the way. Low price points, boxed shipping and easy returns all contributed to a perception in which mattresses seemed disposable—especially when the sales messaging undermined the importance of trying before buying. This increases the likelihood of more foam-based mattresses piling up in landfills, which is bad for the environment.

This opens up a new opportunity for disrupters to introduce more meaningful innovation within this space. For a long time, the concept of innovation has been closely linked to high-tech electronics and smart sensors. But over the past few years, we’ve come to view innovation in a new light. What does it mean to really create a product for the future? First, it has to ensure that there will be a future to exist in.

With this in mind, the most exciting innovations we’ve seen as of late are around sustainability. More than just utilizing recycled components or eco-friendly manufacturing processes, companies like Paramount Sleep, Harrison Spinks and Spaldin are reimagining the entire life-cycle of the mattress with fully recyclable designs and constructions.

It’s a story we’ve seen time and time again, both within and outside of the bedding world: companies getting too big too fast, trying to do too much—and ultimately burning out. Instead of trying to be everything to everyone, we think there’s more success in honing your focus and embracing the niche.

For Casper, embracing the niche looks like trimming its product line to focus just on its core mattress offerings. For other companies, it may look like doubling down their efforts on a specific price point or target demographics. Take Ergomotion for example. Already singularly focused on the adjustable base category, the brand recently expanded with Dawn Home, a line-up that is clearly and specifically created for consumers who are “aging in place.”

Sleep is not one size fits all. And very few companies are capable of filling every need for every person. Knowing who you are trying to reach and what makes them tick paves the way for greater ingenuity and smarter solutions.

Even before the pandemic drove consumers to shop online, the explosion of the online mattress market said a lot about how consumers felt about the traditional buying process. More than just price and convenience, ecommerce perhaps also afforded shoppers a level of privacy they could not find in-store. Rest testing can be an inherently vulnerable experience. A consultative sales process can require the consumer to divulge intimate details about their lives, habits, needs and partners. And when you add on top of that a fear of being tricked into buying a more expensive option, it’s no surprise why many consumers decided to opt-out.

At the end of the day, though, laying on a bed in person is still the best way to choose a mattress. So how do you create a space where consumers feel safe and comfortable?

For some, that may mean more dedicated help from retail sales associates—while others may prefer greater independence. It may mean taking a hard look at your sales force, and making sure it reflects the diversity of your potential customer base. Gaining new customers is about more than just convincing people that they have a need you can fill—it’s also about connecting with people who have previously felt unwelcome or un-supported in the process. You don’t have to transform your store into a circus to improve the mattress shopping experience; you just have to be willing to reexamine how you are engaging with your customers.