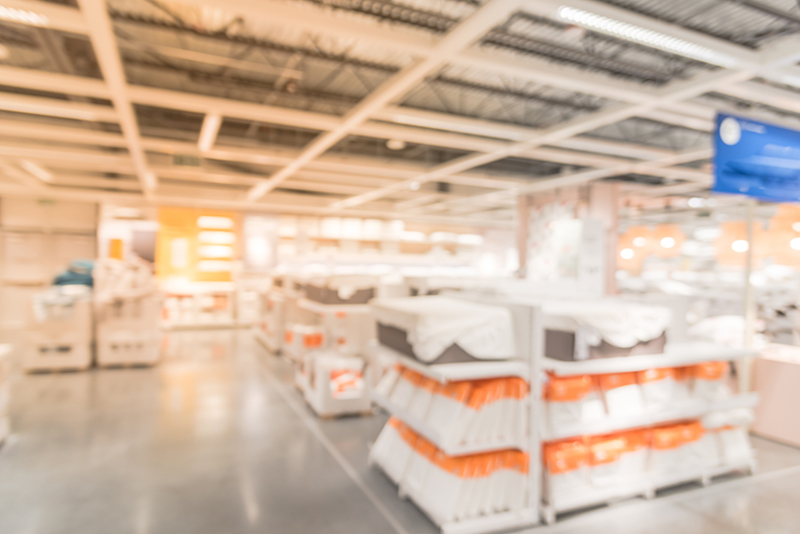 While Casper is no stranger to making bedding industry headlines, the company has been in the spotlight recently for two business moves that felt right out of an old-school playbook. The company has announced plans to expand its distribution to include both Mattress Warehouse and Bed, Bath & Beyond. In a recent article from Business of Home (one we featured in Snooze News), the author considers these new partnerships and wonders: has the disruptor made peace with the disrupted? And we can’t help but wonder the same. With Casper as well as many other formerly “online-only” brands entering into partnerships with more traditional retailers, we wanted to take time to explore what exactly the continual blurring of the lines between ecommerce and in-person retail says about the future of the industry—and what it says about the industry’s recent past.

Later this month, Casper products—including its latest mattresses with “Snow Technology”—will find a place both on Mattress Warehouse showroom floors across the Mid-Atlantic as well as online at Mattress Warehouse’s website: sleephappens.com. And, while the press release covering this news update is riddled with claims that the move is “innovative,” we’d hazard to argue that, in fact, it’s the opposite. This is the way mattress retailing has long worked! Manufacturers partner with retailers to distribute their wares around the country in stores where people can touch and feel them—and now online, giving customers the option to think  more about the transaction and do some research at home before buying. In this case, the name recognition of Casper bodes well for Mattress Warehouse and the added distribution  works well for Casper. But overall, this partnership is a pretty classic one. The key difference is that Casper’s previous partnerships have been with larger and broader retailers like Target that are not so specifically in the thick of the mattress industry.

For all intents and purposes, the brand that previously touted its positioning as way different than the traditional manufacturers and sellers because  it “cut out the middleman” sure appears to be selling out. Though perhaps its next move—a new partnership with Bed Bath & Beyond—reflects a more innovative spin on this classic sales strategy.

While it is still, at its core, a wholesale partnership, the latest agreement between Bed Bath & Beyond and Casper is intriguing. Both companies have had, frankly, a wild ride these past few years. Both have been known to make headlines for the wrong reasons: Bed Bath & Beyond is frequently in the news for liquidating retail locations while Casper went public in early  2020 only to come out on the low-end of its expected range for valuation. The companies have been hard at work on different kinds of comebacks and both have recently seen shifts in leadership that are meant to support that. These efforts might just be paying off.

Even before its partnership with Casper, Bed Bath & Beyond was turning things around. By closing failing stores, the brand  had been able to sharpen its focus on remodeling existing locations that were hanging on and developing a strong private label program—adding a new layer of exclusivity that can help the chain store compete a little better with giants like Amazon. Now, being among only a handful of stores that carry Casper in person positions Bed Bath & Beyond for significantly more traffic. Plus the partnership does come with a fun twist: a shop-in-shop model within the brand’s new flagship store in Manhattan. Bed Bath  & Beyond will feature the very first Casper branded sleep shop inside a store—a fresh and cool factor for the decades-old mainstay. While this move is a positive and clever one for BB&B, it’s not super new for Casper. The DTC brand has been partnering with retailers for a while now and has also opened 70 stores of its own.

What is driving this change to in-store selling among the “online-only’s”?

The shift from online-only being all the rage to the online brands now clamoring to gain a spot on the retail floor or open their own brick-and-mortar stores marks a major turning point in the trend. Today there is less and less delineation between the originally online-only class of mattress companies and the old guard of traditional mattress makers and retailers.

It’s hard to totally pin-point why the disruptors are, as they say, making peace with or even becoming the disrupted but there are a few reasons that might be behind the change:

While the leadership behind many of the up and coming DTC brands had a whole new outlook on the industry, they also often had little to no experience with mattresses or retail. Many of the younger brands were started by individuals who were tired of the mumbo jumbo they experienced while mattress shopping, others simply entrepreneurial generalists who saw a need. But as the DTC brands grew into giants (Purple, Casper and others), they needed to bring in new leadership that filled in where their experience ended — leading to an influx of leaders who formerly worked in other retail sectors like beauty, jewelry, apparel and even sleep. While this is largely speculation, it does seem to be a pattern and it comments on the larger idea that innovation can only go so far. The fact of the matter is that in-person shopping remains a highly desired option in retail—especially in the  bedding sector. While the pandemic showed many  consumers that they could do nearly everything online, especially shopping, it also highlighted that many still wanted the option to shop in-stores.

After a year and a half of staying home, many consumers admit to missing out on the experience of visiting a brick-and-mortar store. While the online shopping innovations of the pandemic created new expectations—like constant restocks, limitless information and contactless pick-ups—the benefits of touching and feeling a product before purchase was sorely missed too. According to research from ChaseDesign, 78% of US consumers plan to shop in-stores more this year (at least, more than they did during stay-at-home orders).

While this data points to consumers’ reinstated ability to shop in-stores more safely once vaccinated, it also shows that people do in fact want to leave the house again and value going to the store. This data could prove especially true for bedding and mattress products. Not only are consumers paying more attention to their health and trying to make their homes more comfortable, but buying exclusively online has helped many people realize that touching and feeling ahead of time really does make a difference.

Online shopping was certainly trending upwards before the pandemic, but when it was made the only or primary option—it became clear that a lot of people seem to prefer a blend of both digital and in-store exploration. The blurred lines between ecommerce-only brands and in-person shopping merely underscore the fact that consumers really want both the convenience of ordering online in their bathrobe as well as the ability to pop in a store when they want to see and touch an item. Creating a positive and memorable in-store experience will remind people of what they’ve been missing, helping everyone—manufacturers and store owners alike—succeed. That  seems to be the strategy Casper and its latest partners are taking.

Why Rain Can Help You Sleep